All text and photos in this blog are copyrighted ©Tui De Roy, and cannot be reproduced, in part or in whole, without her written permission.

For inquiries about these images, and to view more visit tuideroy.com

Although I grew up in the Galápagos, it wasn’t until I was almost 12 years old that I got to see my very first giant tortoise in the wild. They were rare back then, confined to the remotest part of my home island, Santa Cruz. It took a multi-day hiking expedition — my first ever — to find them. I was instantly fascinated, and have since spent much of my five decades as a professional photographer documenting their extraordinary lives.

That particular tortoise in 1965 was a dome-type tortoise typical of the larger, lusher islands. On low-lying, dry islands were other forms, called saddlebacks, which were much rarer still. With a bizarre-looking raised shell and spindly neck and legs, the most extreme of the 14 species is the Española Island tortoise. Decades would pass before I would be able to see one of those in the wild!

The mid-1960s marked the beginning of a momentous journey that would see a species return from the very brink of extinction on an island devastated by tortoise hunters and introduced goats, to a healthy population once again roaming a pristine island — a truly outstanding conservation success that involved intensive work by all manner of government and private institutions, plus innumerable scientists, caretakers, managers, donors and more.

It’s already hot on this December morning on Española Island. The southernmost of the Galápagos Islands is also one of the driest, and the sunbaked lava rocks seem to fair shimmer with heatwaves, even though the cool season hasn’t ended yet. Everything is still, the plants are dormant, waiting for the rains still months away. Although I’ve only been walking about an hour, I swear I have yet to find two boulders of the same shape or angle underfoot, and already my ankles are on fire from so much twisting and turning.

Just ahead, under the skinny shade of a stolid old giant cactus, I see another boulder, a little bigger than the rest. Instinctively I know this is no ordinary rock, and my heart skips a beat. I’ve been waiting a very long time for this moment. A white lump on its back is what led me here: a satellite transmitter providing the GPS coordinates that [Galápagos Conservancy Vice President of Science and Conservation] Dr. James Gibbs, advisor to several giant tortoise conservation projects, sent me from New York a few days ago. 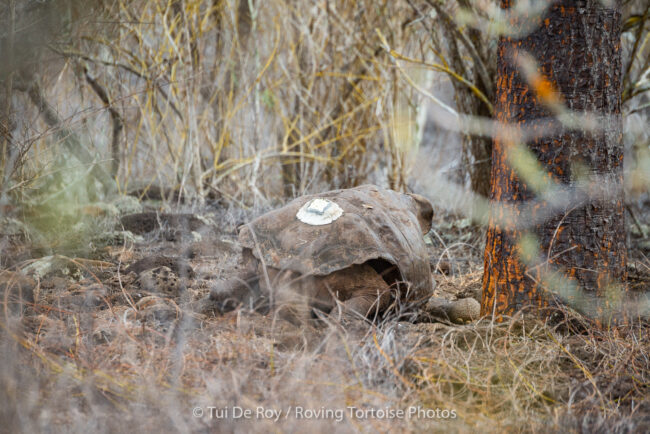 The rock doesn’t move, but slowly a slender head rises like a periscope, and shiny black eyes, set in an oddly pale face, study me at length. Gingerly I step forward, as if granted a royal audience, and indeed that’s what this encounter is. In a low voice — which he may or may not be able to hear — I say “Hello Diego, how ARE you doing old man? What’s it like to be home at last?” He looks unfazed, totally at ease, as if he hadn’t just spent 90+ years in exile! 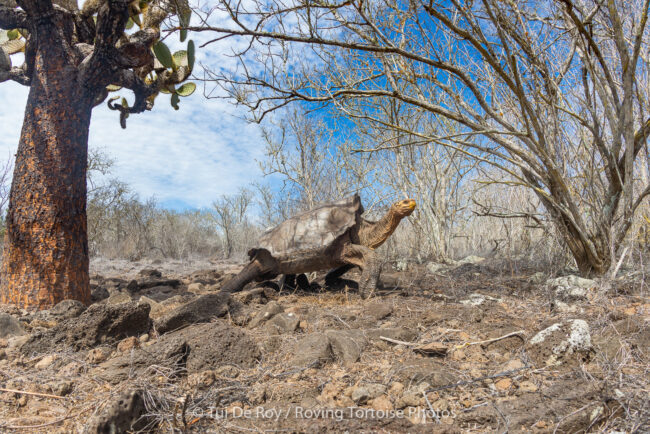 Diego is an old male Española saddleback tortoise, Chelonoidis hoodensis, and his journey is nothing short of extraordinary. His nickname comes from the four decades he spent at the San Diego Zoo, from where he was generously returned to Galapagos in 1977 to join the captive breeding program that was started by the Charles Darwin Research Station, and later expanded by the Galápagos National Park Directorate. During this time, Diego became famous as a ‘super stud’, fathering many of the thousands of baby tortoises hatched at the facility for reintroduction to their island of origin. Galápagos Conservancy is now working with these and other local partners, with the ambitious goal of restoring giant tortoises to their former glory on all their ancestral islands in Galápagos. 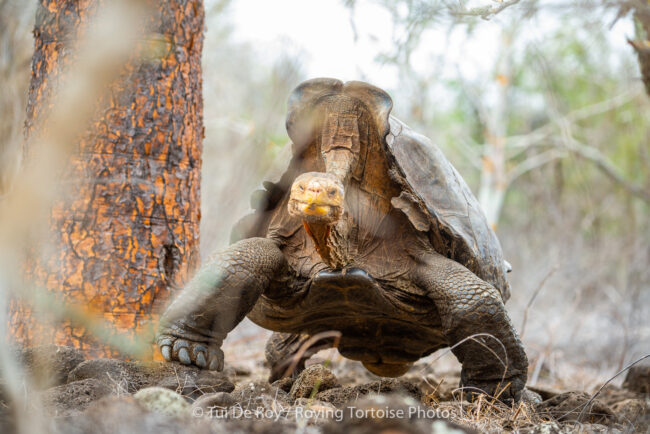 But for now Diego is at peace, home at last: Mission accomplished, his species saved. All he needs is a fruit or spiny pad to fall from the cactus in whose shade he waits for the next rainy season to green up his island once more.

His story is a long and tortuous one, beginning with a trip to New York’s Bronx Zoo in a visionary effort to forestall his species’ extinction. There were many twists and turns, with most of his congeners before him not being so lucky. In 1820 Española tortoises were reportedly cooked in their own shells by the desperate castaway sailors of the whaling ship Essex after it was sunk by an enraged sperm whale — the real-life story that gave rise to the famous 19th century novel, Moby Dick. And during the California Gold Rush, hapless Galapagos tortoises figured as “terrapin” on expensive exotic menus in San Francisco. 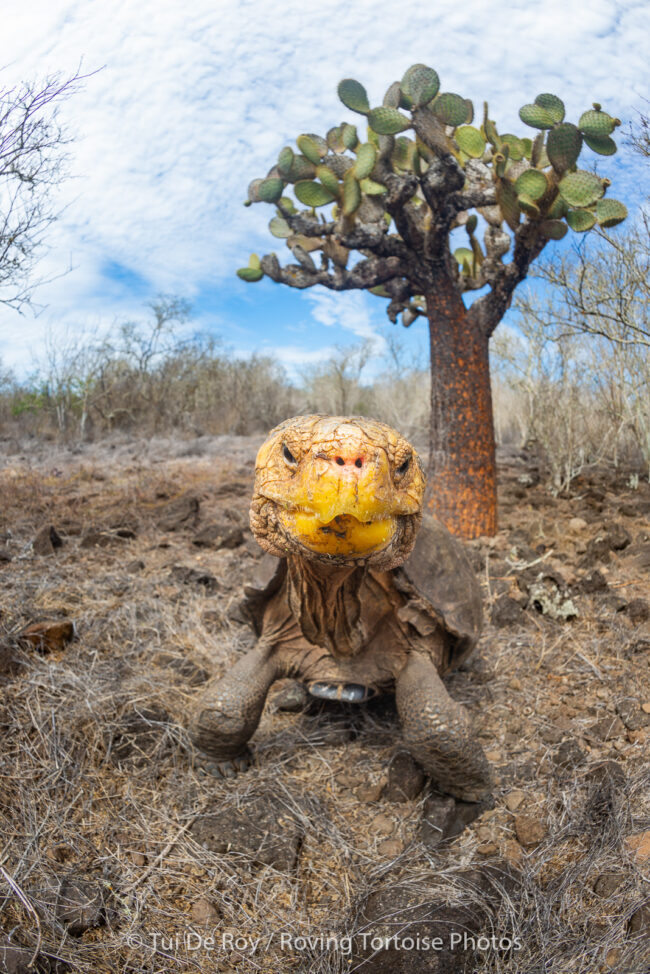 As I get closer, Diego rises from his rocky bed and slowly walks toward me, taking long strides so typical of his saddleback form. I quickly change from a telephoto lens to a wide-angle and crouch low to the ground for perspective. This entices him to raise his head high and open his mouth wide, a typical giant tortoise dominance gesture. I duck behind his cactus for a different view, and he follows. We play this game for nearly an hour until the rest of the team from the Darwin Station appears. Although they keep a respectful distance, Diego’s demeanor changes instantly: he can count! One person is intriguing, maybe entertaining even, but four’s a crowd. And humans in a crowd tend to do undignified things to giant tortoises, like lift them to be weighed, or worse, turn them on their backs for a health check or blood sample. Diego wastes no time: he turns tail and heads for the thickets — the spell is broken. 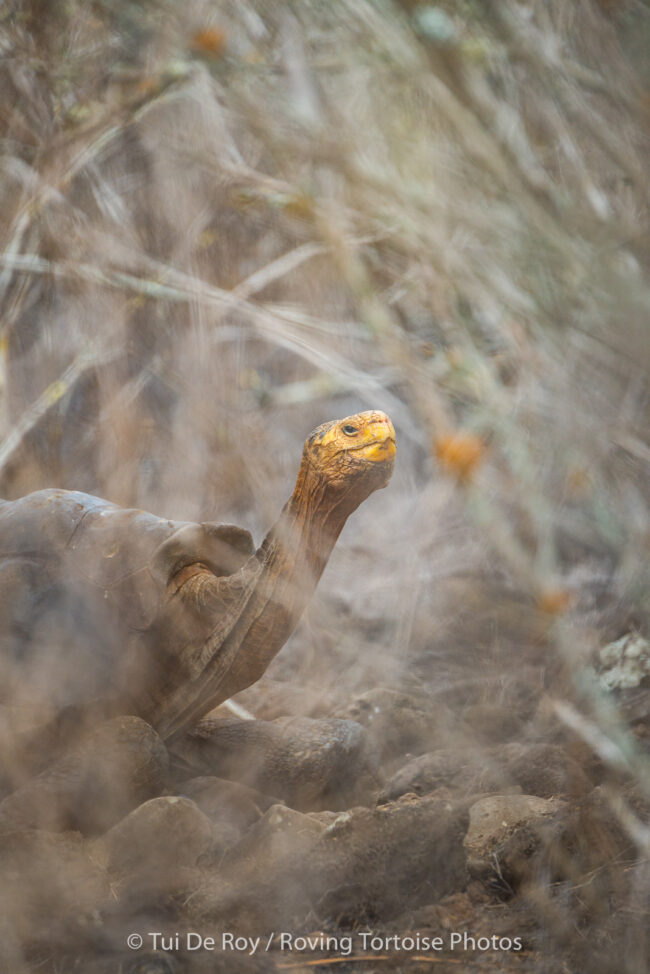 Diego’s full story, with all the details of how his species was saved, is available for licensing in article form by contacting me for a customized manuscript and photo selection: tuideroy.com

Read more about Tui’s adventures by visiting her blog here.

Read more about our work restoring Giant Tortoise populations (with the help of Tortoises like Diego) by clicking here.