After conducting decades of research and advising on giant tortoise conservation, including helping to rediscover descendants of a thought-to-be-extinct giant tortoise in the Galápagos Islands earlier this year, Dr. James Gibbs, Washington Tapia and Dr. Linda Cayot are set to release the world’s leading resource on these island dwellers: Galápagos Giant Tortoises. 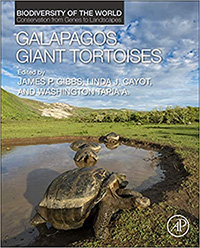 The book, published by Academic Press, is the latest addition to the collection Biodiversity of the World: Conservation from Genes to Landscapes. A professor at SUNY College of Environmental Science and Forestry (ESF), Gibbs also co-leads the Giant Tortoise Restoration Initiative (GTRI) with Tapia, the program’s director, and Cayot, who retired in 2019. The GTRI is a collaborative effort with the Galápagos National Park Directorate to restore tortoise populations to their historical distribution and numbers across Galápagos, including on islands where tortoises went extinct.

Of interest to researchers, conservationists, and students, Galápagos Giant Tortoises presents current information from leading authorities on giant tortoises. Despite being icons of the world-famous Galápagos archipelago and the target of more than 50 years of conservation research and management, Galápagos giant tortoise evolution and much of their ecology remained unknown — until recently. The 25 chapters of the book document the history, pressing conservation issues, and success stories recovering several of the 15 different species of Galápagos tortoises from near extinction. These include ongoing efforts “de-extinct” two species of giant tortoises.

Readers will enjoy an historical overview of the relationship between humans and the Galápagos giant tortoises, including stories of exploitation by pirates and whalers. The iconic reptiles’ biology is explored, including the evolution, taxonomy, ecology, habitats, reproduction, and behavior of these gentle giants. Captive breeding, invasive species management and tortoise health — as well as the current status and distribution of every species — are discussed.

The book also features first-hand testimony, many images of tortoises in the field, and four case studies of species restoration, and concludes with the editors’ prognosis on what the future holds for all tortoise populations.

“This book provides the first synthesis of our knowledge of these famous creatures, and will serve as a guide for full restoration of the giant tortoise dynasty of Galápagos over the next century,” commented Gibbs.

More information on the book, including how to order, can be found on the Elsevier website.

Based on a news release from SUNY-ESF, used with their permission.