‘Galápagos Giant Tortoises:’ Synthesis of a Half Century of Study and Conservation 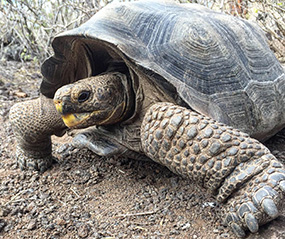 In July 2012 — a mere two weeks after the death of Lonesome George — twenty-seven people from various countries met in Galápagos to delve into the existing research on Galápagos giant tortoises, determine the necessary steps to truly restore their populations, and plan for the next few decades of tortoise conservation. The workshop participants included herpetologists, botanists, park rangers, geneticists, invasive species specialists, veterinarians, and more from an array of organizations. Over five days we discussed, debated, planned research needs — like filling knowledge gaps about the different tortoise populations — and identified multiple projects to enhance the long-term conservation of various species.

Now, eight years later, much of that work has been accomplished — or at least started, as truly successful conservation can take decades. One major product is the definitive volume Galápagos Giant Tortoises, which was completed in 2020. Over half of the book’s chapters were written by participants in the 2012 workshop. This has been a major effort by all involved, and I am so proud of and thankful to all who participated — in field trips, laboratory research, data analysis, writing, and so much more. There is still much to do to restore these populations, and there are a lot of young scientists and park rangers to follow in our footsteps, just as we followed those who came before us.

Excerpt from Dr. Cayot’s blog on the Elsevier website:

Galápagos Giant Tortoises provides the most comprehensive, up-to-date synthesis of information ever assembled on these iconic reptiles. This complex of 15 endemic species (Chelonoidis spp.), of which three are extinct and one yet undescribed, distributed across 8010 square kilometers of the larger islands and volcanoes of the Galápagos Archipelago, represents the greatest concentration of endemic species of not just tortoises but of all turtles anywhere on the planet. 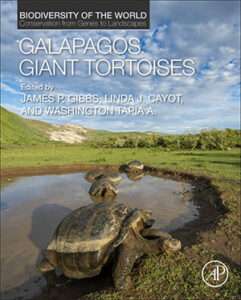 The book begins with an overview of the place of Galápagos giant tortoises within the world of turtles and tortoises. This is followed by an in-depth look at human-tortoise interactions, beginning with human perceptions of Galápagos tortoises through history, then an in-depth analysis of the era of exploitation, the visit of Charles Darwin in 1835 and the subsequent importance of giant tortoises in the development of his theory of evolution by natural selection, and finally the era of collectors and the beginnings of scientific inquiry.

The natural history of Galápagos tortoises is covered in 10 chapters, many of which present previously unpublished results. These chapters cover: evolution and phylogenetics; morphology; reproduction; thermoregulation; diet, behavior, and activity patterns; population biology; movement ecology; tortoise habitats; the role of giant tortoises in island ecosystems; and giant tortoises in a changing climate.

The remainder of the book documents tortoise conservation, which began in earnest in the 1960s. Beginning with search and rescue, followed by an ever-growing tortoise breeding and repatriation program, control and eradication of invasive mammals that impact tortoises, the eventual incorporation of tortoise genetics into tortoise conservation strategies, and an increased focus on tortoise health in both captive and wild populations, nearly all tortoise populations are now on a strong trajectory toward full recovery. Species replacement programs are also underway or being planned for those species that went extinct due to human activity.