Counting Birds in Galápagos: My Experience on Santiago Island

As a biology student at the Pontificia Universidad Católica del Ecuador, I have been fortunate to visit Galápagos almost every year — a goal that I had when I began my studies. In 2018, I worked as a volunteer on the Landbird Conservation Project at the Charles Darwin Foundation (CDF) where I learned to monitor bird nests. This year, I returned to Galápagos again to work on the landbird project, but this time I was also trained to participate in bird counts.

Invasive species are the most dangerous threat to the stability of bird populations in Galápagos. According to recent assessments, 42 bird species are at risk of extinction in Galapagos, of which 24 are landbirds. Amazingly, we still know little about the abundance of landbirds in the Archipelago. That is why CDF’s Landbird Conservation Project has been carrying out regular monitoring since 2014 to detect changes in bird populations.

This year, I took part as a trainee in the censuses carried out on Santa Cruz and Santiago Islands in two types of habitats: the transition zone and the humid highland forest. Researchers David Anchundia, Michael Dvorak, Birgit Fessl, Nikolaus Filek, and Sabine Tebbich meticulously taught me how to identify Galápagos birds by their vocalizations as well as the point-count method for estimating populations. The most difficult part was identifying each bird that we heard, since the songs of the finches are quite similar among some species, and a single species can have several different song types. Nonetheless, at the end of the training I felt very confident in my species identification and bird counts.

The trip to Santiago was one of the greatest field trips I have ever participated in. Thinking about being on an island that had been visited by pirates and explorers, and where few people have been, is astonishing. Sadly, Santiago has a long story of introduced species (e.g. goats, pigs, donkeys, and blackberry). Although the first three species are now eradicated, they and the expanding blackberry have brought about major changes to the landscape.

After an hour-and-a-half boat ride and a five-hour hike, we reached a hut built by the Galápagos National Park Directorate (GNPD) in the highlands of the island. The first afternoon, we unpacked and settled in to the camp. Considering how remote we were, we enjoyed the luxury of having electricity at night and mattresses to sleep on.

We spent nine days on Santiago walking along old trails made by the GNPD for pig eradication and other conservation projects to count birds. By the end, the team of four scientists and myself counted birds at over 170 points and registered a total of 18 species. During the trip we were on the lookout for individuals of the Little Vermilion Flycatcher species, which has not been seen on Santiago since 2016. Unfortunately, we were unsuccessful. This is likely due to the recent expansion of blackberry, which forms a dense understory and makes it more difficult for the Little Vermilion Flycatcher to forage. This, together with blood-sucking Philornis downsi fly larvae, might be causing a reduction in this species’ breeding success and thus numbers.

This year, the Landbird Conservation Project team has now counted birds on more than 90% of the islands — and for the first time, has a much better understanding of the status of landbirds in the Archipelago. This information will now be used to highlight species that need intervention to protect or recover populations. It will also be used as a baseline to detect any changes that may happen over the coming years.

When one gets to know places like Santiago — full of curious hawks, chatty Galápagos Rails, roaming giant tortoises, unique finches such as the endemic Sharp-beaked Ground-finch, fields of ferns, beaches, dry and humid forests, and hills and lagoons — one is able to better understand why these islands are called “The Enchanted Islands,” and why it is important to preserve life in such a paradise. 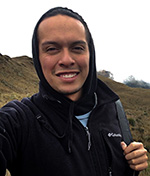 Cristian Poveda is an Ecuadorian biologist; he earned his bachelor’s degree from the Pontifical Catholic University of Ecuador. His interests are mainly focused on the ecology, behavior and conservation of birds. In addition to volunteering with the Landbirds Project at the Charles Darwin Foundation, he has participated in the study of population dynamics of the Galapagos Hawk on Santa Fe Island as well as in the research of plant – hummingbird interactions in the mainland — a topic he developed for his bachelor thesis.

Galápagos Conservancy has been supporting the Charles Darwin Foundation’s Landbird project since 2013. Read more about the conservation of landbirds in Galápagos.