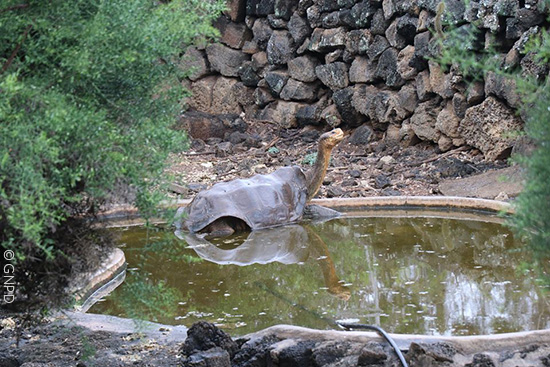 Ecuador’s Environmental Ministry has decided to end the 55-year captive breeding program for Española tortoises following an ecological evaluation of Española Island, conducted by the Galápagos National Park Directorate (GNPD) and Galápagos Conservancy as part of the Giant Tortoise Restoration Initiative (GTRI). The evaluation demonstrated the recovery of habitat conditions and of the tortoise population that it hosts, thanks to the captive breeding program of the Chelonoidis hoodensis species; the breeding program was thus deemed to have met the restoration objectives for which it was created.

“Based on the results of the last census conducted at the end of 2019 and all the data available since 1960 — both of the island and its tortoise population — we developed mathematical models with different possible scenarios for the next hundred years. The conclusion was that the island has sufficient conditions to maintain the tortoise population, which will continue to grow normally — even without any new repatriation of juveniles,” said Washington Tapia, director of the GTRI.

“In addition to the recovery of the giant tortoise population, which went from 15 to 2,000 thanks to this program, the management actions implemented for the ecological restoration of the island — including the eradication of introduced species and the regeneration of cacti through Galápagos Verde 2050 project — have helped to ensure that the island’s ecosystems currently have adequate conditions to support the growing population of tortoises,” added the Director of the Galápagos National Park, Jorge Carrión.

The closure of the Española tortoise captive breeding program will entail the return of the 15 unique breeding adults (12 females and 3 males) originally found on the island, which have allowed the repatriation of tortoises to their natural habitat since the program’s inception in the mid-1960s. This week, these breeding individuals began a quarantine process to eliminate risks of seed dispersal from plants that are not typical of the island. The plan is to release them back to Española, their island of origin, in March 2020.

This group of tortoises includes the famous Diego, the male who spent 30 years at the San Diego Zoo before being recruited to contribute to the captive breeding program. Diego, who is over 100 years old, will return to his home island almost eight decades after being extracted from it. In recent years, Diego has become a symbol of the Galápagos conservation, as approximately 40% of the tortoises repatriated to Española Island are estimated to be his descendants.

Based on a news release from the GNPD, translated with their permission.