Anatomy of a Dataset: Investigating Changes in Galápagos Highland Flora

When I arrived in Galápagos last November, I was prepared to spend my working hours with the Charles Darwin Foundation (CDF) at the helm of a computer screen. As a biostatistician for the CDF’s Terrestrial Invasive Species Group, I was tasked with analyzing data from long-term vegetation monitoring sites around the highlands of Santa Cruz Island. Nonetheless, when my gracious supervisor, CDF restoration ecologist Dr. Heinke Jäger, inquired as to whether I was willing to assist in fieldwork, I didn’t hesitate to swap out my sandals for hiking boots and gaiters.

Days in the field typically begin at 6:30 AM. Starting from the Charles Darwin Research Station, a short drive into the highlands of Santa Cruz takes us through the village of Bellavista and onto a steep dirt road, winding through sugar cane and open pasture before coming to a dead end at the trailhead to our destination field site: Media Luna, named for the half-moon shaped crater that stands guard over the park entrance. A three-meter wide “buffer” of bare ground marks the border between the Galápagos National Park and the island’s designated agricultural zone. But the real divide between humans and nature here at Media Luna is far more complicated.

Since the late 1800s, agricultural development has dramatically altered highland ecosystems in Galápagos — even in areas supposedly “untouched” by humans. Over half of the approximately 1,500 introduced species on Galápagos are plants. The landscape at Media Luna was historically dominated by Miconia robinsonia, an endemic shrub with shiny, curled leaves and long stalks of purple-ish flowers, which form a dense chest-high canopy that shelters endangered Galápagos rails and petrels. The “Miconia Zone” has been modified over the last century by grazing, fire, and invasive plants such as red quinine (Cinchona pubescens).

Our ability to measure the precise extent of human impacts on Galápagos ecosystems, and to separate those effects from background sources of variability such as El Niño events, is constrained by a lack of historical data. For this reason, it was especially powerful to return to our 31 plots at Media Luna, twenty-two years after they were first established by Dr. Jäger. This project — supported by Galápagos Conservancy for the last six years — has yielded one of the longest active areas of vegetation cover in the Islands.

Moving beyond the buffer zone, we depart from the main trail (don’t try this at home!), using GPS to navigate to PVC pipes that mark the northeastern corner of each plot. We are vigilant of every step, looking out for petrel nests and lava tunnels. When we finally locate a plot, we dump our belongings and measure out five 20-m-long transects, recording plant cover every 10 cm. I am the scribe; Heinke identifies each species with ease, calling out scientific names, which until this point I had only experienced as letters in an Excel sheet. It is a mindful and patient exercise, one without shortcuts.

Over the years, this data has helped guide management decisions by the Galápagos National Park Directorate, which has carried out efforts to control the invasive quinine since the 1970s. It’s clear that the history of this landscape is still being written; our data show that quinine is declining at Media Luna, even in areas that have not been subjected to control (the culprit? A pathogenic root fungus — but that’s another blog post).

The hidden drama of plant communities plays out on the scale of human lifetimes; the only way we can bear witness to change is to combine “snapshots” of data over time, like still frames in a video. On long, rainy days in the field, this commitment to the broad picture keeps us moving forward, one transect at a time. 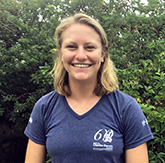 Clare Peabody joined the CDF in November 2019 as a Biostatistician for the CDF’s Terrestrial Invasive Species and Ecological Restoration Group. Clare is a graduate from Brown University with honors in Environmental Science (Conservation Science and Policy). She was born and raised in Santa Cruz, California in a family of ocean lifeguards. Clare leverages her previous experience working with ocean monitoring programs to analyze vegetation data from the CDF’s long-term monitoring sites at Media Luna and Los Gemelos.